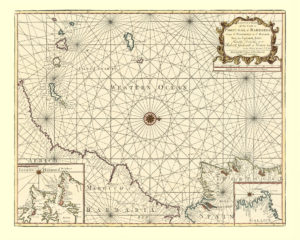 Nautical Map of the Atlantic Ocean by the Coast of Spain, Portugal, Gibraltar and Morocco, 1760

This is a nice example of what are known as portolan charts – navigational maps based on compass directions and estimated distances observed by captains at sea. Portolan maps have one main compass rose in the middle with 16 other compass roses located in a circle around the main rose.

The Age of Discovery peaked with James Cook and his famous voyages in the second half of the 18th century. The biggest problem in sea navigation was solved around this time when the marine chronometer invented by John Harrison enabled the measurement of accurate time and, therefore, accurate longitude at sea. Whereas latitude could be easily determined at sea by measuring the sun’s angle at noon, the measurement of longitude remained a major problem until the 1760s. With the invention of the chronometer, it was possible to accurately measure the time of a known fixed location, for example, Greenwich Mean Time (GMT). Knowing GMT at local noon allows a navigator to use the time difference between the ship’s position and the Greenwich Meridian to determine the ship’s longitude.

The Royal Greenwich Observatory displays a collection of the first chronometers invented by John Harrison. His life-story is narrated by Kathryn Lasky in her children’s book “The man who made time travel”. 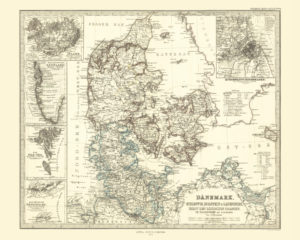 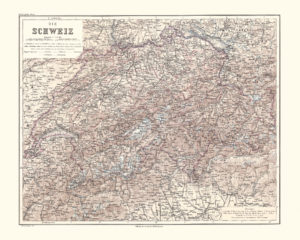 Half of the 19th century was a very turbulent period throughout Europe with Switzerland no exception. A short civil war resulted in the emergence of Switzerland as a federal state in 1847. In 1848, a federal constitution was adopted and amendments in 1874 established federal responsibility for defence, trade and legal matters. This version of the Swiss federal constitution remained unchanged until 1999. 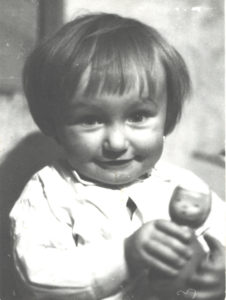 Many people have asked me this question in the last few months. As far as I know the word „kobeica“ has no official meaning in any language. Yet it means a lot to me. According to our family legends, I invented the word as a two-year-old, using “kobeica” to refer to all of the subjects around me. My father really liked the word and in order to give it some proper meaning, his pliers and screwdrivers case was named “kobeica” for many years. So the word lived with me for pretty much my entire childhood. And a couple of months ago, when I had to come up with a name for my e-store, I knew immediately that the time had come to give the word a somewhat more sexy meaning than just a screwdrivers case. “My word” as a name for “My e-store” that is :-).

The slogan “Here, There, Everywhere” is also a part of the Kobeica logo (and identity). It was chosen for two reasons. First, all of them are adverbials of place – they define a location. And this is what antique maps are about: places and their depiction throughout history. The second and no less important reason is that the slogan is a clear reference to the Beatles song “Here, There and Everywhere”, which I adore as much as I adore The Beatles itself.:-) 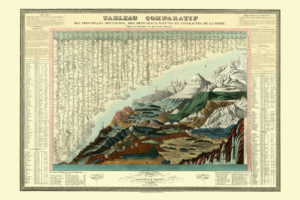 Comparative Table of the Highest Mountains, Waterfalls and the Longest Rivers on Earth, 1830.

The chart shows that not all the mountains in Himalaya were fully surveyed and measured in 1830. Back then, Dhaulagiri (now number seven) was considered to be the highest mountain on Earth. Mount Everest (also known as Sagarmāthā in Nepal or Chomolungma in China) was identified as the highest mountain by the Indian surveyor and mathematician Radhanath Sikdar in 1852.

The chart also shows that the world’s longest rivers were not yet fully explored in 1830. The Nile, now officially identified as the second longest river in the world, kept its stream unexplored for a long period of time. It was not until the late 1850s when Victoria Lake was established as the stream of the White Nile. A good example of how surveys have progressed since 1830 is the Brahmaputra River, which on this chart is shown as the 9th longest river in the world, whereas today it is listed as 29th.

Similarly, the height of the world’s highest waterfalls, the Angel waterfalls in Venezuela was not identified until 1949. The novel “Icarus”, by the Spanish author Alberto Vasquez-Figueroa, tells the fascinating life-story of Jimmy Angel, an aviation pioneer and personal pilot to Lawrence of Arabia, who travelled South America in the 1930s and revealed the Angel Falls to the outside world in 1933. 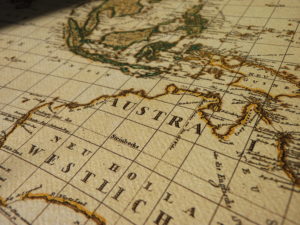 As has already been discussed in previous chapters, handmade paper and old maps simply belong with each other. That is why we love handmade paper so much in Kobeica and use it for all our prints. We print reproductions of maps that were, in most cases, originally printed on handmade paper when they were first published. This makes our reproductions very authentic; the handmade paper suits them well. We use a non-bleached mixture of linen and hemp, and this shade gives an ancient look to our vintage maps. As a result, this is a wonderful product that can decorate your wall for many decades to come.