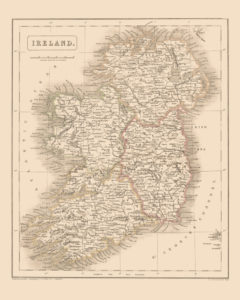 This map shows the administrative division of Ireland in 1840s. There are four provinces depicted: Connacht (marked in green), Leinster (pink), Munster (yellow) and Ulster (orange). This division is based on the historical Irish kingdoms. All of them feature their own unique emblem from medieval times. A concept called “Dindsenchas” emerged in early Irish literature as a poetic description of a place. According to one of these texts, the four kingdoms had the following characteristics:

Neil Hegarty’s: “The Story of Ireland: A History of the Irish People” provides an excellent guide to Irish history.